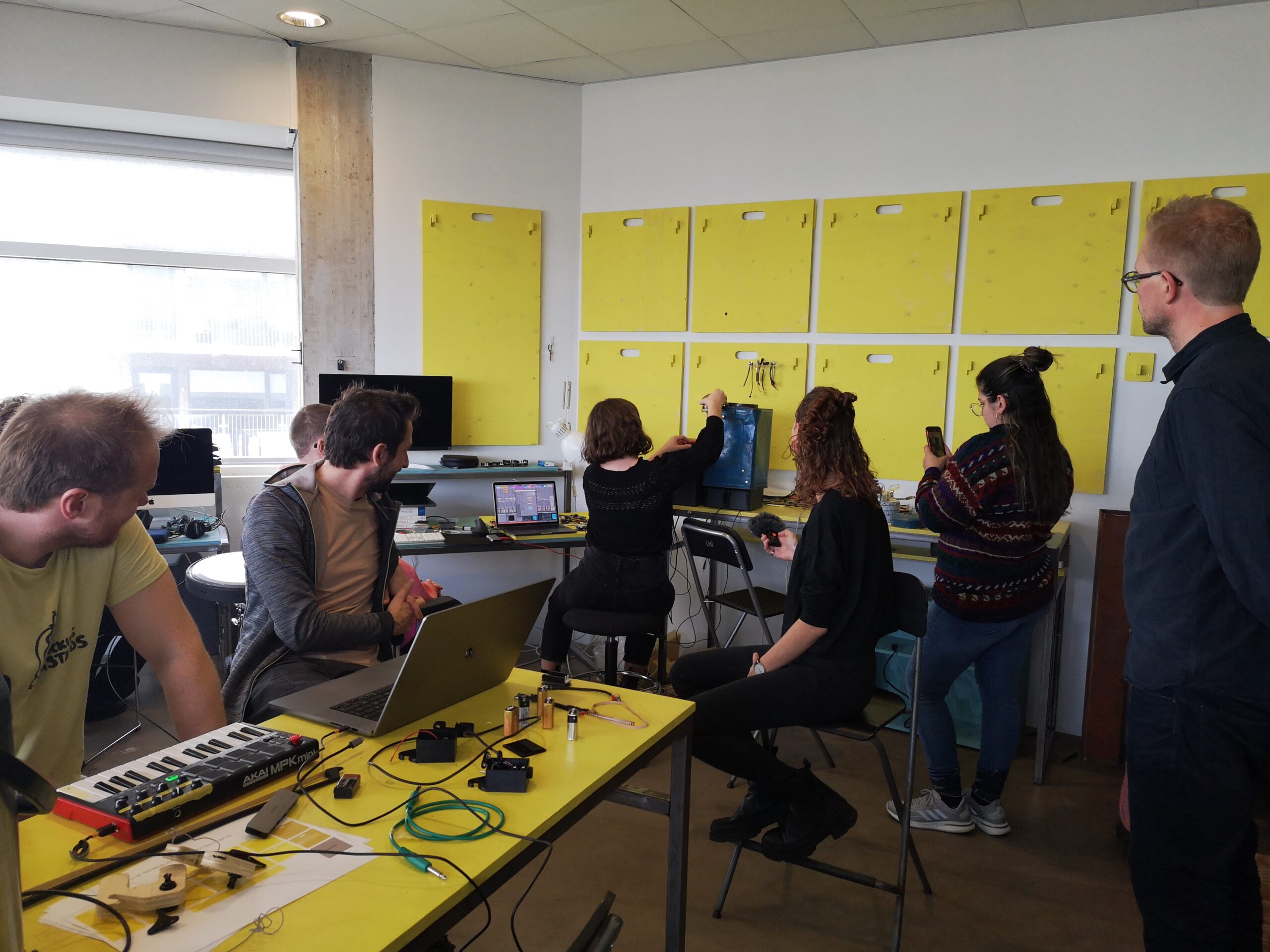 A constant loop of controlled noise and intermittent buzzing lives within a yellow, acoustically-paneled room at Listaháskoli Íslands, Iceland’s arts university. In this laboratory for intelligent instruments, the buzzing is two-fold. Prototypes of the instruments we may see for sale in the coming decades are vibrating in interaction to each other, and so are the people within: researchers, some with a STEM (science, tech, engineering, math) background, some with a music background, and some with both – vibrating with excitement, buzzing in and out of the room with collaborative possibilities and coffee. Fear not, if like me, you are not well-versed in programming and synthesizers. Starting my seventh week as a music student in LHI, I have been telling myself every week to visit the intelligent instruments lab, but finally immersed myself in it these past two days, within the frame of the Nordic Music Days Festival.

The lab explores a marriage between digital and physical sounds, mirrored by the visual and tactile aspects of most of the instruments inside. You don’t have to be a musician to walk into the open lab and experience these instruments, however complex in their inner workings. You hear familiar guitar melodies and snare drum patterns intertwined with metal clanging and synthetic waves. In addition to the open lab, you may hear some of these instruments demoed in the opening concert of the Nordic Music Days 2022.

Sitting in the middle of the room is Kári Halldórsson, a computer science professor in Reykjavik University who has been creating a touch-screen synthesizer for over a year. Interested in rhythmic as well as FM synthesizers, he has gradually achieved more ambitious creative goals with his instruments – the one in front of him on the table being his second physical creation. He presents a 3D-printed device featuring a tactile screen the size of a smartphone’s, in which you can play with the sound of your MIDI controller – anything from attack, to envelope, to pitch shifting. He is now moving on to creating a coded instrument from scratch, assigning individual pitches to images that interact with each other in randomized ways.

On the other side of the lab room, two musicians are experimenting with percussion. Jack Armitage has built upon a snare drum he commissioned.  He makes music with a feedback loop that magnets create on the drum skin, when the instrument vibrates. On this instrument, drummers are able to play with the pedals in order to control the pitch by loosening or tightening the drum head, as they would on an acoustic kit.

Next to him, Mari Siskova works on her peculiar-looking instrument: an old blue metal lantern that had been discarded but she rescued during the Rusl Festival in Reykjavik this summer, as part of a recycled instruments workshop. ‘I never thought I would be using this instrument after that workshop, but here we are’, she says. It started as a purely percussive instrument, whose metal body reverberates with a cluster of overtones, product of its bumps from years of use. Now, the instrument has evolved to a hybrid: Mari projects sounds onto it with speakers and picks it up from the body of the instrument with a microphone, which then also creates a feedback loop – the crux of the sound. The possibilities are endless. Mari borrows the magnets from Jack’s snare drum and reflects on the change of timbre. Inside the instrument, she puts different objects like sand and nails, although placing a candle inside is her favorite. She says ‘it reminds us of the original purpose of the object’, which she has prioritized throughout the development of the instrument. While she can now process audio from different sources, like voice and violin, through the body of the instrument, the interphase somehow remains simple and intuitive – a treat for the audience.

A relaxed and collaborative atmosphere prevails amidst the echoes, resonance, and discussions in the intelligent instruments lab. After an hour of listening to electric glissandos and feedback, somehow a synchronicity is revealed. Each person in a bubble, united in focus, merging and scattering, playing and giving each other space to play, and giving the spectator a complete visual, tactile, and aural experience.