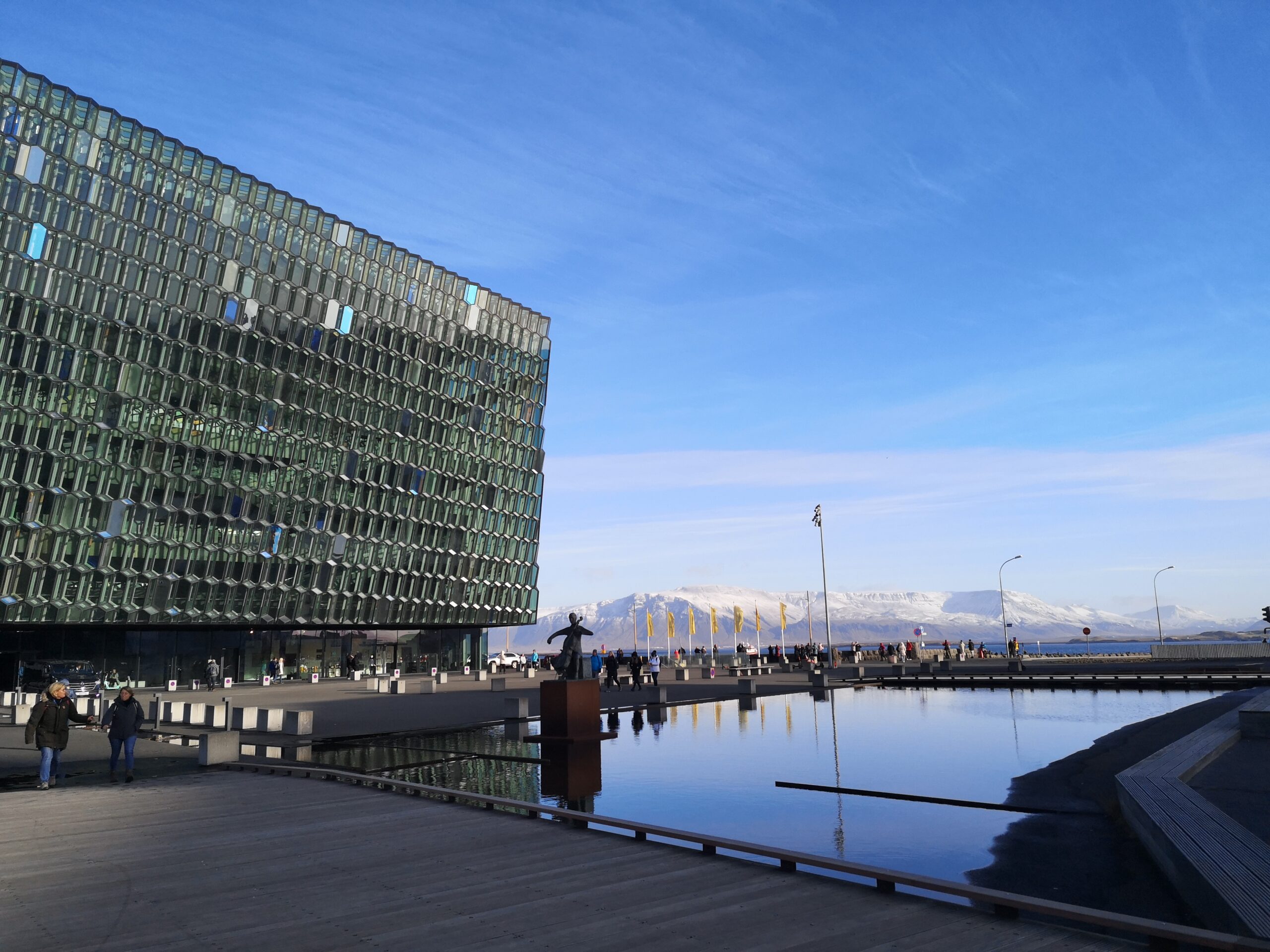 „Nýtt og norrænt“ by the Iceland Symphony Orchestra was like a concert of nightmares, but in the best way possible. Five pieces by living and working contemporary composers were played by the orchestra and each one felt like a different kind of horror.

It all starts with a sharp screech from the violins in mix with mystique deep tones reminding me of the spring, or summer, maybe fall? Suddenly it is so icy! In just nine minutes we have gone a full cycle. The orchestra brings out all sorts of feelings, from the vulnerable high notes from the harp, deep bass sounds from the contrabass and sneaky build-up on the timpani which all of a sudden becomes so strong that you just know how small you are when nature takes matters into its own hands. Every musician up on the stage has a role to play in the Ring of Fire this masterpiece represents. Nature can make you feel strong and empowered on a sunny day in the Caribbean, and the next thing you know a volcano is erupting and all that strength disappears. Outi just told me – I have never been in the Caribbean but somehow through her music she told me! When I closed my eyes I felt and I saw the extremes of nature. How hardship hits with all its force, still from the ashes rises something, a flower so small and fragile, but at the same time so strong because it survived the great powers of the Earth. I wish the piece would have lasted all night. I look forward to follow Outi’s work in the coming years, I wont say that she has potential, because she is already amazing and I can’t see it continuing in any other way. She has a heartfelt, but still a moving way of telling stories with her composing.

I had had very low hopes for the following concert, since I am not such a big fan of contemporary music – or so I thought. My only experience this far had been contemporary music that is made to test your brain and is in a sense “not made to be beautiful”. However, I was completely blown away by the first piece of the concert, „The ring of fire and love“. At first when the piece had just about started, I was gravely disappointed when I heard how string-heavy it was, and I was preparing myself to sit through classical horror of pretentious music ideas, like drumming on your cello and playing the piano strings with a toilet brush. But to my surprise, the rest of the composition was absolutely enchanting, it completely held my attention throughout the whole performance. It was so cleansing, beautiful, deep and soothing that I forgot all my worries and I liked it so much that I went straight after the concert to try and find it on Spotify. To my dismay, I did not seem to be able to find it anywhere, but I look forward to hopefully hearing it again in the near future and am definitely looking forward to hearing more from Outi Tarkiainen.

Contemporary music doesn’t have the best reputation amongst my friends and me, and I am honestly expecting just a bunch of tiring noises, but „The Ring of Fire“ is a pleasant and interesting piece! Like a score from a movie, but instead of through actors on a screen, the pictures easily come to you through the music. In my mind, there are vultures soaring in the sky as the earth is erupting. But suddenly we are transported to a new world, where a peaceful waterfall runs carefully into a silent pond. The use of percussion is brilliant, and though the musicians were quite loud, they always added something to the story. The best part of the piece is undoubtedly the muted trumpet solo! A call for help from a distance, but the rest of the orchestra ignores the calls and keep on with their own lines.  If this piece was to be recorded and published, I would buy it and listen to it again!

When I arrived in Harpa, I had no idea what to expect. When I realized that we were going to listen to contemporary music I must admit, my expectations were not high. When the first piece (“Ring of Fire and Love”) played, it came as a pleasant surprise. I enjoyed how the harp gave such a distinguishable contrast to the other instruments, and I found the orchestration in general well done. However, I had the same problem with this piece as I have with almost all contemporary pieces. A lack of direction, partly due to the piece not having a clear melody. I truly think this piece could have benefitted greatly if it introduced a strong memorable melody early in the piece.

Scary but relaxing the high pitched flickering starts. The feeling of uncomfortableness starts but always goes away in a bit when the music gets to a safe place. It goes back and forth. It starts to feel comforting. Still a feeling of fear from some of the instruments like something is imminent. We are all scared. Alluring feelings come through, safeness, while still feeling movement within. Absolutely fascinating.

“The Ring Of Fire And Love“ by Outi Tarkiainen stood most out to me of all the pieces that were played tonight. The harp is prominent in the piece and harpist Katie Buckley played beautifully and confidently. In beetween there where nice string parts that captured me. This piece reminded me of music that could be in a film. Also „Segel“ by Lisa Streich was a very interesting piece. The percussionists were lined up around the orchestra and they had a big role in this piece. In the middle of the piece there came sounds that reminded me of a boat sailing on the sea, the wind expanding the sail which was beautiful! The musical performance of the Iceland Symphony Orchestra was generally very good and conductor Anna-Maria Helsing was very expressive and she captured the dramatic and tense mood of the pieces.

Shrieking noises to begin this concert in Harpa, loud and dramatic sounds that cut through my ears. Ugly, so to say, but somewhat beautiful. I can clearly see a sea in front of me, with multiple crashing waves gushing over each other and volcanoes rising. It all becomes quite chaotic, like audience and orchestrawere sailing through the ring of fire ourselves. The harp plays a beautiful but unsettling sound. I quite like the use of the trumpet in this piece, as it has some subtle jazz undertones, whether intentional or not. It’s a beautiful piece to start this concert, with as it flows perfectly into the next composition.

“Zurvān” by Idin Samimi Mofakham feels like an exploration in a mountainous and empty land, no life and nothing man made to be seen. For me this is somewhat unnerving as the fear of being alone strikes me in a way nothing else could, and this song is a good representation on how that feeling can be portrayed, and I mean this with the highest form of appraisal.

A truly remarkable night in Harpa. As a part of the Nordic Music Days in Iceland, the Icelandic Symphony Orchestra played some contemporary pieces by most exciting composers. One particularly fascinating piece was Idin Samimi Mofakham’s “Zurvān”, a tone poem about the Persian god Zurvān. It is a tremendously exciting work that follows the struggle and brutal sacrifices that Zurvān has to make when wishing for a successor. Terrifying chords and explosive drums paint this picture very well. Then the two sons of the god are introduced: one a very quiet chap and full of nobility and beauty, the other a harsh and brutal one. This is a piece of great opposites, a struggle between good and evil and a must-listen for all classical music enthusiasts.

If anyone in the audience were about to doze off, their plan of getting a sweet nap undoubtedly fell through when the orchestra began to play Segel by Lisa Streich. The piece opens with a loud and abrupt percussion clap, which surely gets you wide awake. Percussionists have invaded the stage in such a manner that one might think they had entered a samba dance club instead of the main stage of the Icelandic Symphonic orchestra. The percussionists surround the orchestra while it softly plays uncertain notes without a clear destination. One by one, the percussionists rudely interrupt the instrumentalists with their loud bangs, disturbing their buzzing. The instrumentalists have successfully regrouped themselves as the piece progresses, but their peace doesn’t last for long. The percussionists strike again, now with a new ally who performs a highly convincing imitation of hypnotic oceanic noise. The sea’s attraction is too heavy to bear for the string players which start to hit their instruments with their bows as if they were timpani. But the percussionists achieve victory. The rest of the orchestra plays ineloquently like they are been brutally wounded. The conductor seems to realise this, and in an attempt of mercifully soothing their misery, orders an untimely closure of the piece.

„Grisaille“ is Gunnar‘s world premiere on his piece. It recalls all the different emotions we feel throughout life. There are sounds of happiness, sadness, hope, mystery and fear. The woodwind instruments make me think especially of happiness and the piano encorporates of sadness. The rest of the instruments are good at portraying all of the emotions. I notice how in some parts of the piece, the string instruments sort of go up and down, causing a feeling of uneasiness, like going through an emotional rollercoaster. The piece ends dramatically with a loud snap.

„Ärr“ by Jesper Nordin reveals as my personal favourite of this concert. All of the other pieces are great, but this one really stands out to me. I love how it slowly buils up from being very quiet to becoming extremely loud. All the instrument sections are doing their own thing, but it all comes together so well! The drums are especially loud in this one, which I enjoy very much. The percussionists did a very good job at making this sound that I can´t really explain, like a white noise that erases lots of pressure. The piece starts off with this, building lots of tension from the very beginning. I enjoy focusing on each section at a time and hearing how different they are from each other, but at the same time working very well together.

„Ärr“ by Jesper Nordin starts off with a steady buildup full of tension. The percussion takes a central role in this buildup and it would have been fascinating to have a better view of them during the performance – our class was sitting in the first rows, right in front of the orchestra. When the buildup reaches its climax, the vibrations from the orchestra can be felt in one’s chest, which is a powerful experience. Then comes out a beautiful flute solo that shines like rays of sunshine through the dark clouds that ware there before. The final climax of the piece is again very well prepared and built towards, first with strings and then reinforced by the introduction of percussion. Even after the orchestra has mostly died down again towards the end, there is still a buzzing in the audience‘s chests from the sheer scale of the piece. A great and interesting work that served as a satisfying finale to this concert of the Nordic Music Days 2022 in Harpa.