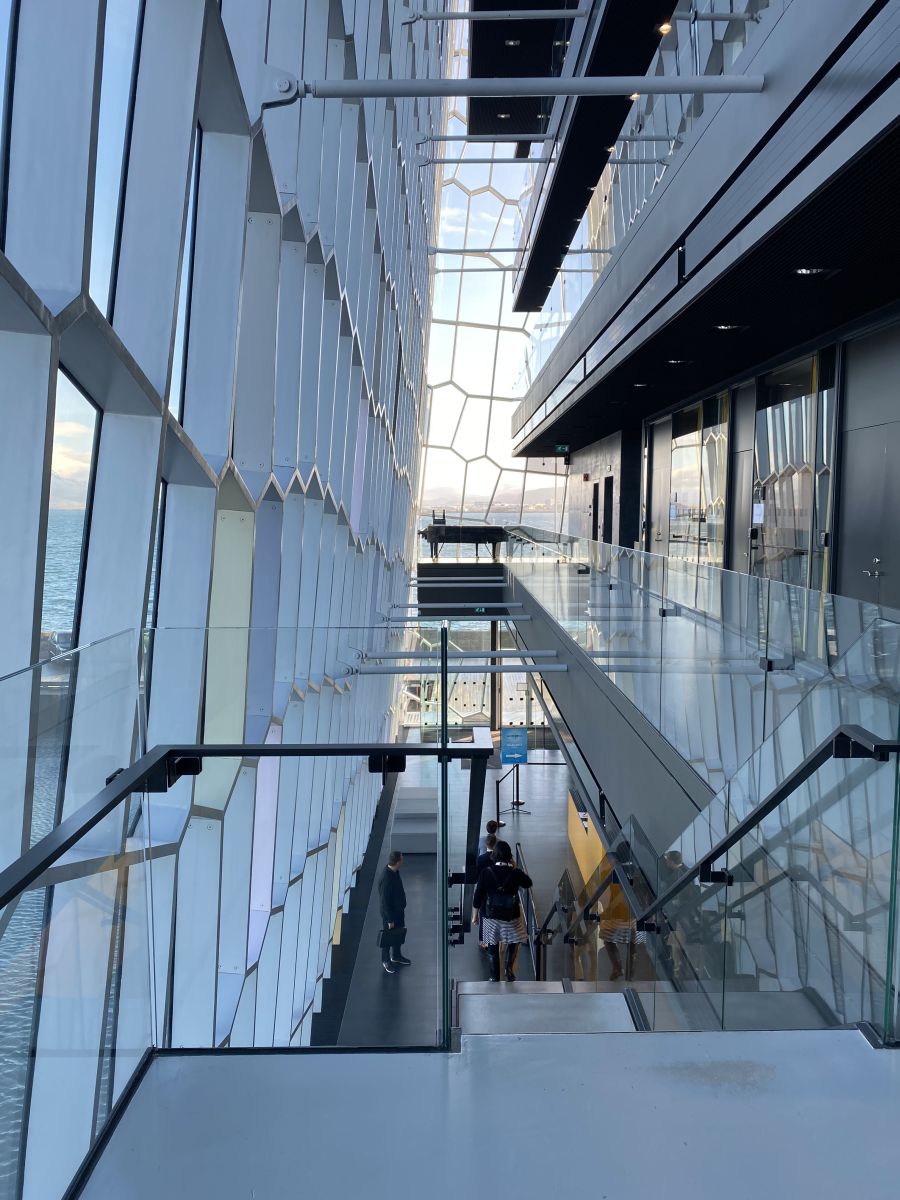 I walk wide-eyed into Harpa, the steel honeycomb prism that anyone in Reykjavik recognizes as the most prestigious venue in Iceland. The glass exterior provides no clue as to the red-paneled concert hall within, a huge theater that seats up to 1600 guests. Coming from a Latin American country, everything from the design to the inner workings of a first class arts institution fascinates me.

It’s a morning rehearsal, and the musicians start arriving by car, bike, and foot. Just a regular work day. eing a working musician is so common here, but such an alien thing in my hometown of Panama City. I am led through the backstage area with a breathtaking view out on the sea and the mountains into the hall where the musicians take their seats and review their scores. As I gradually take in the energy of the room, the conductor takes her podium. Guest conductor Anna-Maria Helsing wastes no time, directing the musicians to start with the first of five contemporary pieces to be played in the evening as part of the Nordic Music Days festival. She conducts energetically and generously cues the musicians. As I have studied conducting for five years now, I analyze her movements and the response of the orchestra, absorbing what I can. Her baton reflects the house lights rhythmically as she beats, always providing a clear pattern. While she is dressed in black jeans, a black shirt, and red sneakers, the musicians weareveryday clothing in every color.

None of this really matters, of course. The only thing that matters is that the music is the protagonist, both of the rehearsal and of the program. Three of the composers are present. They watch the orchestra rehearse their piece like a parent overlookstheir children play. Being inthis rehearsal in the middle of an empty Harpa is a privilege, breathtaking and inspiring to this Panamanian. While it is possible to be a female band leader, music director, or even conductor in my country, the social norms around it are entirely different. In my own conducting journey, I have experienced too many incidents of systemic and casual misogyny to list in one article. I have had a conducting mentor trying to sleep with me (then pretending it didn’t happen), and another mentor expecting me to be his secretary for free. I have had theater directors cast actors against my warning that their vocal range is inappropriate for the music, and seen those same directors allow sexual harrassment within the cast and crew.

Maybe these occurrences do happen in a country such as Iceland, in a city such as Reykjavík, but the misogyny is not palpable in the air. It is hard to picture such discrimination in a festival where the artistic director, the producer, and a large number of the composers present are female. As one of the most egalitarian countries in the world, Iceland in the eyes of a foreigner seems to truly value people based more on their merit than their gender (case in point, when the festival is not in session, the principal conductor of the ISO is Eva Ollikainen, who also happens to be a woman).

Not wishing to idealize– as I am sure no place on earth is completely safe from misogyny yet– Iceland seems to be at the forefront of an artistic and social movement that I hope catches on globally. It is only fitting that these realizations happen during Nordic Music Days 2022, as the festival’s theme this year is IMPACT, and it has indeed impacted me. In this traditionally male industry, the female leadership in Nordic Music Days injected me with the hope that people like me can be valued and find their place in music.