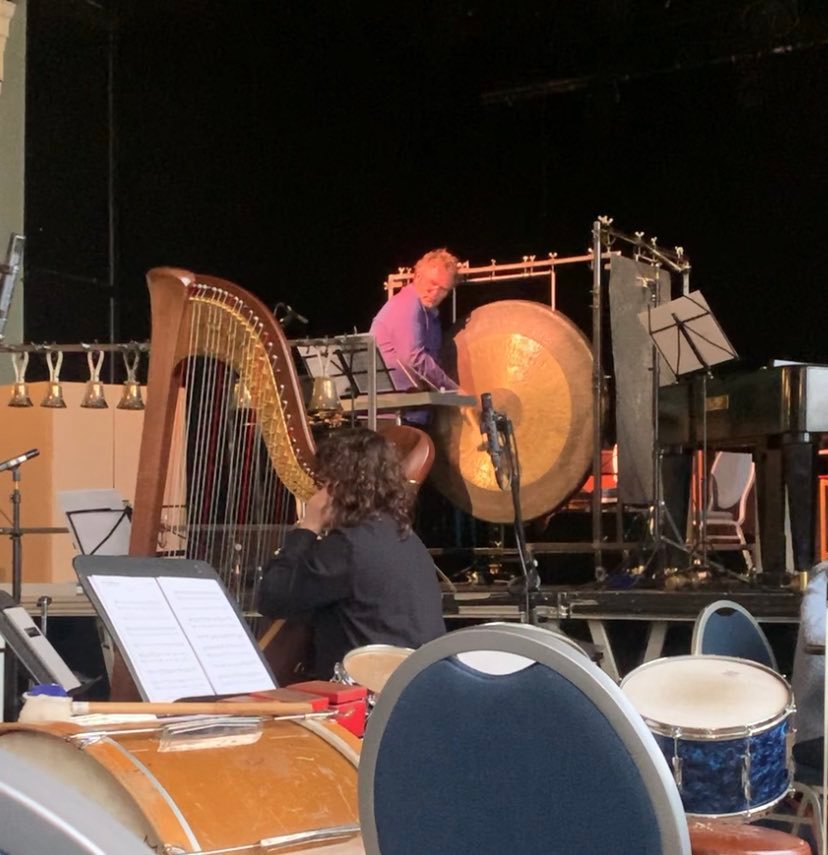 Some of the pieces were just so beautiful! „Ser Islenskt vögguljod a hörpu (+stuss fyrir Frank)“ by Bara Gisladottir, which translates: „Special Icelandic lullaby on a harp (+things for Frank)“, felt like a storm. A huge one that just got bigger with each second. Some people at the concert covered their ears, it got so loud. But while it was so loud and overwhelming you could stilll find steadiness of the growing cresendo and with that, beautiful peace. So it is possible to say it was also relaxing. Maybe it was relaxing because of how loud it was, too loud to hear your own thoughts. In the end when it got to the loudest point he suddenly stopped baning with the mallet on the big gong he had and let the tones that were left sounding, float in the air until there was silence. This was by far the loudest piece. Harpist Katie Buckley and Frank Aarnink, the percussionist who plays that „stuss“, form the Duo Harpverk – were playing amazing throughout the concert.

„Stundom“ by Tove Kättström, which translates: „Sometimes“, sounded so so beautiful, pretty lines both in the harp part and also in the percussion part. „Rondo“ by Bara Sigurjonsdottir was really good. How the percussionist used a string instrument bow on a cymbal to make this amazingly fun sund was very interesting to watch. The harp melody in this piece was really engrossing and fun. In some of the chapters everything was everyhere and a lot going on but then it went back to the first chapter again and again because it´s a rondo form as the title says.

„Gatt“ by Una Sveinbjarnardottir, which translates: „Gateway“ or „Portal“, was such an interesting piece. Frank had some kind of a mallet and was hammering with it on something. It sounded like hammering right on the strings inside a piano. The lines he did on that instrument were really beautiful. The harp player put a piece of paper between the strings of the harp and was touching the plastic in circles so it made kind of a wind blowing sound in the background of the percussionists instrument.

„Blue Light“ by Eivor Palsdottir was stunning! Loved it. It sounded so dreamy and light in the air and made me so happy to listen to. The percussionist was playing bells, hanging from a stand with a lot of bells in a row, so smooth sounding. The harp line was astonishingly beautiful through the whole piece.

„Piece of Cake“ by Ingibjörg Fridriksdottir started with a sharp high pitched sound made by Frank, the percussionist, with a drumstick on top of a cymbal. This sound is so scary but yet there is something beautiful to it. The harp held the thirll with long flickering tones through the piece. Frank also made a fascinating and beautiful sound by stroking a string instrument bow at the end of the keys of a vibraphone that just sounded so good.

Overall I´m so glad I made it to this concert and got to see and hear all these fun and interesting percussion things Frank played and got to listen to the beautiful harp sound from Katie.