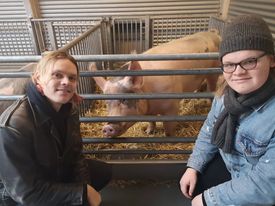 Have you ever eaten pork while standing besides a pig? Have you ever talked about slaughtering pigs in front of pigs? No? Composer Mathias Monrad Møller was letting people try that at the Reykjavík zoo, it was strange but very, very interesting.

I walk into a stable with pigs and I notice one loudspeaker standing on the floor. Two pigs are walking around in circles in a stallion and performing their daily tasks. Within a few minutes, a  computer voice begins talking in English, but with a Danish accent, and the voice is telling the audience about what they will be doing. The voice is telling about a tasty souvenir that is very popular in Denmark, it is made from a pigs skin and then cooked a little. When the voice has talked for a little while, Mathias walks in and hands us all a bag of this flæskesvær. Now everyone has a bag and we are told to do all kinds of things with it; massage it, hold it against our ears and more. Finally, the voice tells us to open the bag and smell, I find the smell rather disgusting and take it straight away from my face and I can’t  control my facial expressions and they are not a mark of joy. Then we proceed to eat one piece, I decide for my own good and self-respect not to do so, and many others do not proceed to taste. Mathias doesn’t  look so unhappy to chew on it and swallow. But in fact, he doesn’t like the packed snack, he tells me afterwards.

Me personally, I don’t like this Flæskesvær, but I have tried fresh Flæskesvær and that is definitely much better. But it was so interesting seeing such few people actually tasting it because I performed it in Denmark before and everyone tried it. But I think it needs to be fresh, then it tastes very nice.

What was going through your mind when you were writing this piece?

I wrote this piece in 2019, I don’t remember specifically what led me to write this piece. I wanted to make a piece about nationalism and I was also thinking about making some sort of guided tasting of something Danish. First I thought of these butter biscuits that are also quite famous, then I thought of flæsksvær, because it is so much more provocative, because it is pork meat and there is a lot of industrial pork production in Denmark which is problematic in many ways. There are a lot of people in Denmark who want to eat pork meat as some sort of protest towards people who don’t eat pork for whatever reasons.