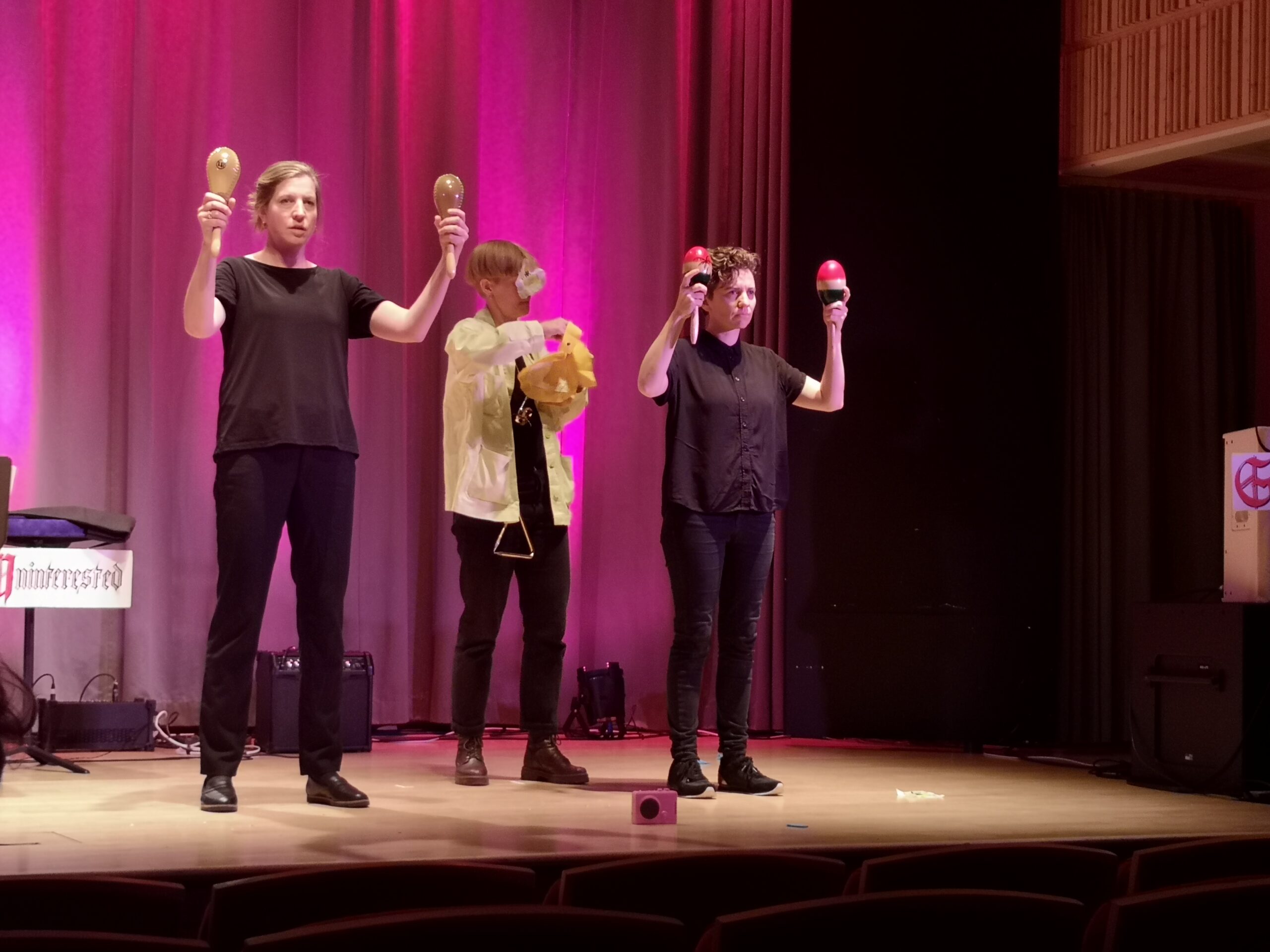 The Pinquins is a group of three Norwegian percussionists, Jennifer Torrence, Sigrun Rogstad Gomnæs and Ane Marthe Sørlien Holen, formed in 2008. They decided to play new music because it sort of comes naturally for percussionists and the three of them absolutely love it. They appear several times in the Nordic Music Days, also in a full program for children they present in several schools in Reykjavík. Over a cup of coffee, Jennifer tells me that there actually is a huge difference in playing in front of children and playing in front of an adult audience. The programs the Pinquins create are very alike. Very theatrical, they sing, they move, which catches peoples eyes. But children tend to react differently than adults. They are not afraid to laugh or ask questions, while adults are often afraid of judgement.

First thing I notice when I’m  walking into their rehearsal in Salurinn is that the stage is only equipped with one set of drums for Jennifer, but all of a sudden I hear two performers playing from behind, so I turn my head backwards and notice that on the balcony Sigrun and Ane Marthe are playing their instruments. This is very unusual, but very interesting. Une of Jennifer’s drums is placed on top of three blue bowls and it is connected to a Line 6 amp, which makes the sound waves go straight through my body. A second drum is laying on top of three chairs. Like in every other soundcheck, there is always some technical difficulties, but of course they are finding ways to get by those problems and it is all working out just fine.

The concert starts in the foyer outside the concert hall, where the chairs of the NOMEX are still in place and the Pinquins are sitting amongst the visitors. They are playing a piece by the Norwegian composer Martin Torvik Langerod. He composed it during the beginning of the pandemic, he tells me later and is meant to be played outside in a public place, it is called Neste Eon. After a few minutes of them playing they stop and we are told to go inside the hall and take a seat. I take a seat in the fourth row on the left side. All of a sudden, the musicians are in place, Jennifer is on the stage and the other two are behind the audience on the balcony.

The piece by Martin Smorland sounds wonderful, three percussionists and none of them are doing the same thing, yet it sounds so good! It feels like the sound you hear when you go to the cinema and you can feel the bass pumping in your heart. All of them have a cymbal, automatically played by a battery coffee creamer with plastic strings attached to it, two on each one. That looks like a miniature fan, but makes this cold sound.The musicians are well synchronised and it all feels so intense and complicated. After a while of playing they take up pink toy walkie-talkies and move them around to make them feedback, they also whisper into them, it all makes really interesting noises and feels like a scene in a movie where there is about to be a jumpscare, brilliant! Instruments are meant to be used to their full capacity and the Pinquins are doing that for sure. Then the three start walking around the audience with  triangles and gongs while humming, the sound circulates and makes the atmosphere feel intense, but at the same time it is very calming. It is not only music you hear, it is a whole show for your eyes as well – this is art!

The three Norwegians make the audience laugh, they make the atmosphere intense and play around with all feelings possible during their performance, it is very enjoyable and The Pinquins can for sure put on a good show.